Noel In France No Different From Christmas Celebrations Elsewhere

Christmas is a major occasion celebrated, as a public holiday, on December 25 by many countries around the world. In France, this special day is called “Noel”. The French celebrate Noel in much the same way as people of other nations do. While there may be some marked differences in certain aspects, many of the ways by which Christmas is celebrated are common among many countries.

Giving of gifts and putting up decorations are just two of the traditions that are associated with celebrating Christmas. A visitor to France, spending Christmas for the first time there, will surely find many things about the French celebration of the holidays similar to those familiar in his home country.

1. Creche – The “creche” (Nativity scene) is an important part of the Christmas celebration in France, and almost every French home as well as churches has one. Little figures made of clay, called “santons” (little saints), are arranged in the creche to depict the Holy Family, the Magi, and the shepherds. In addition to these familiar figures, the French creche may also include other figures in the form of local characters. The santons are often colorfully made to add life to the creche.

2. Sapin de Noel – The putting up of “sapin de Noel” (Christmas tree) is a tradition that began in France in the 18th century. The tree is adorned with ribbons, flowers made of paper, and, sometimes, with apples. Today, however, the Christmas tree is no longer as popular as it is in other countries.

3. Le Gui – The hanging of “le gui” (the mistletoe) above the door is a tradition meant to bring good fortune to homes and families. The French make use of the mistletoe though more during the New Year celebrations.

1. Foie Gras – The “foie gras” (fat liver) is perhaps the most popular French food served during the Christmas season. It is made of goose or duck liver that has been fattened through some special feeding process.

2. Crepes – These are very thin pancakes made from wheat flour. Common crepe fillings are ham, eggs, mushrooms, and cheese. Those who prefer their crepes sweet can have them filled with fruit spreads, maple syrup, or simply with powdered sugar.

3. Dinde Aux Marrons – This is a special food served in many homes in France during Christmas. It is turkey stuffed with chestnuts.

Other foods traditionally served during Christmas in France include “chapon” (roasted chicken), oysters, and smoked salmon. For desserts, there are “buche de Noel” (cake made of chestnuts and chocolate and shaped into a log), “calissons” (fruit-flavored candies), and quince cheese (a sweet, thick jelly).

The most popular traditional songs heard around France during the Christmas season include “Minuit Chretiens” (“O Holy Night”), “Pat-a-pan” (similar in concept to “The Little Drummer Boy”), and “Quelle est cette odeur agreable?” (“Whence Is That Goodly Fragrance Flowing?”).

Christmas is always a happy occasion, especially for children. In France, children expect to receive toys, candies, fruits and other gifts from “Pere Noel” (Santa Claus), by putting their shoes in front of the fireplace hoping that these will be filled with the goodies. 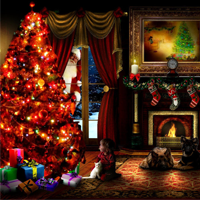